I’ve said it before and I’ll say it again.

There are not enough hours in the day.

Between working 40 hours a week in an office and a long commute plus finding time to work out, I find that I really only have a few hours in my day that are my hours.

Oh, and I also usually have to fit in some quality time with my lover, Trader Joe’s.

I clearly made a trip there recently.  Can you tell that I hadn’t been grocery shopping in two whole weeks?  I cleaned up.  No, seriously, there was practically nothing left on the shelves.

I have a problem.  Do you think there’s a TJ’s Anonymous somewhere I could join?

**By the way, If you live in Chicago, watermelons are still in season!  The one in the picture above is the best one I’ve had all season- it’s not too late!   Go buy one immediately!**

Some nights a good portion of my time is devoted to making dinner.  I am a total freak and find cooking calming, but it’s not uncommon that I look at my watch once I’ve plated my food and find that I’ve spent a good 2 hours making dinner.

Here’s my tip for those foodies who love making a home cooked meal but don’t love spending all of their free time doing it:

Cook for a crowd even when it’s just you and tweak your recipes all week.

The nice people at POM Wonderful sent me a case of juice to sample (hi Ryan!) and I used it to make a simple sauce for my chicken:

Heat skillet on medium heat.  Add a bit of oil and sautee the onion until soft and slightly caramelized.  Add the vinegar and juice, reduce heat to low.  Simmer until the sauce has reduced by half.  It can be served as is, or if you want a thicker sauce, dissolve the cornstarch in an equal amount of water and stir into sauce.

I seared up some chicken and cooked it through in a 375° oven, then dumped the sauce over it.

It was really simple and really good!  I bet this sauce would also be great on salmon.  I cooked a whole bunch of chicken and I’ll be having it for several more meals.  Plain, in a pita, on a salad, you name it.  Much easier than cooking a whole new chicken dish.

I also made some green bean fries to go alongside my chicken. 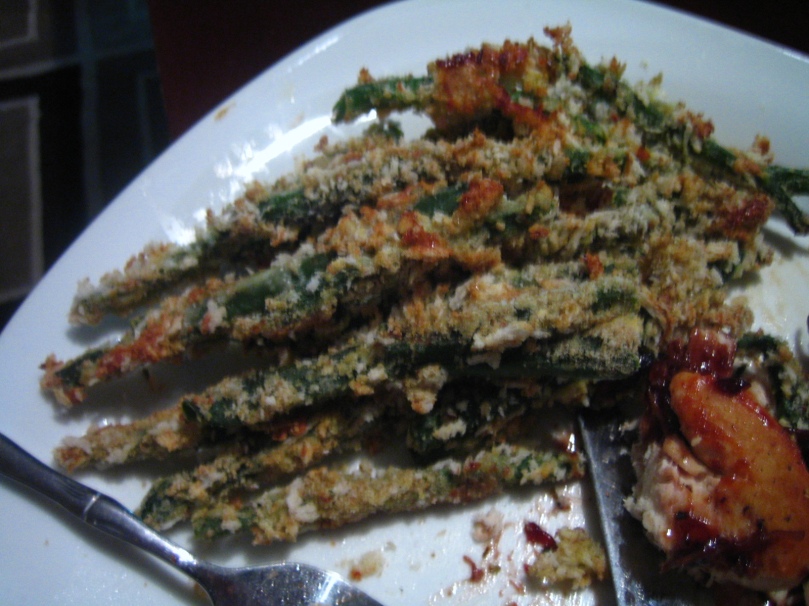 I parboiled them in chicken broth, battered them simply in flour, egg and seasoned breadcrumbs and then baked them for about 30 minutes at 375°.  I made enough for leftovers, but they didn’t make it.  I ate them all.  They were really good, although next time I’d stick to traditional dried breadcrumbs rather than panko (rice) breadcrumbs.  I’ll tweak the recipe another day- details to come.

I love knowing that I have leftovers in the fridge.  It’s lovin’ that keeps on giving.

Do you have a favorite sauce that you like to make for your proteins?  Have you ever cooked with pomegranate juice?  I highly recommend it!