The day has come.

After months of stringing you along, I’ve finally done it. 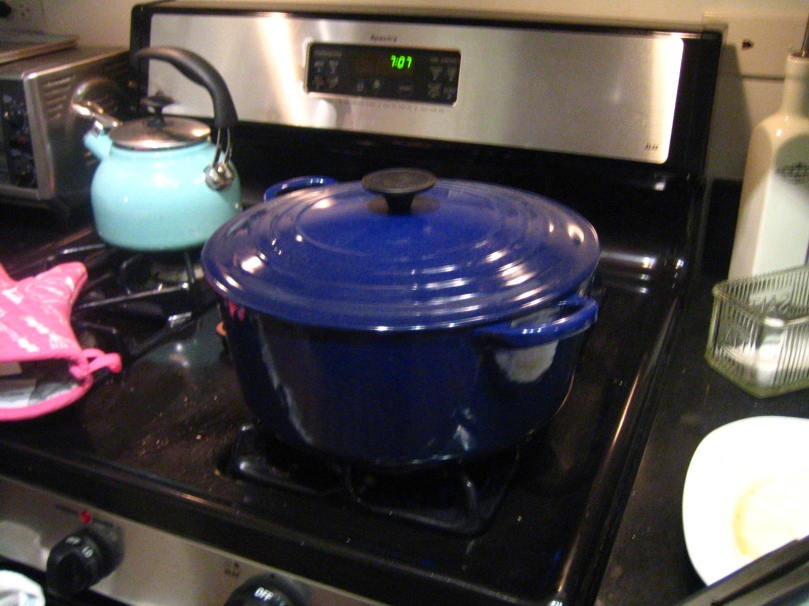 I made braised food.

Although the name of my blog is admittedly tongue in cheek, I’ve felt somewhat like a poser for a while having cooked not one single braised meal.

It is, after all, the method of champions.

If you’ve never been one to look at your dutch oven longingly, waiting for that moment when the perfect braising recipe will present itself, have no fear.  I promise it’s easy.  And surprisingly soothing.  Or maybe I’m just a freak of nature that likes getting a chicken stock facial from leaning over my cookware too often.

Check out this article for a basic how-to on the method.

The impetus for this dish was the chicken.  I’m a sucker for a deal, and bone-in chicken breasts were only $4 at Trader Joes.  You can’t beat it. 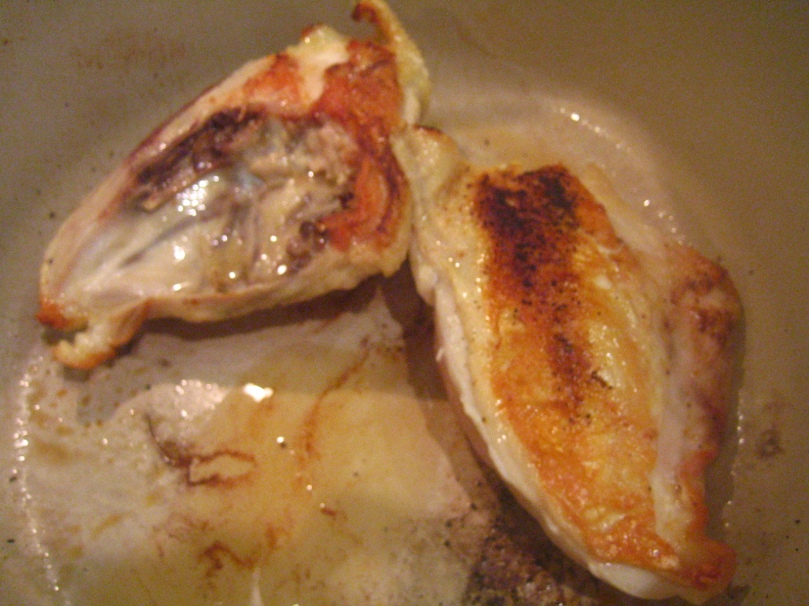 And since I was feeling kinda frisky today, I thought it was only fitting to make something spicy.

The first thing you want to do is pat the chicken dry.  This is gross, but just do it.  You won’t get the crispy golden chicken you want if you don’t.  You start by getting a really nice crust on the outside of the chicken, and then let it rest and render out some bacon.  You don’t have to do this part, but it adds so much flavor.  I mean, it’s bacon. 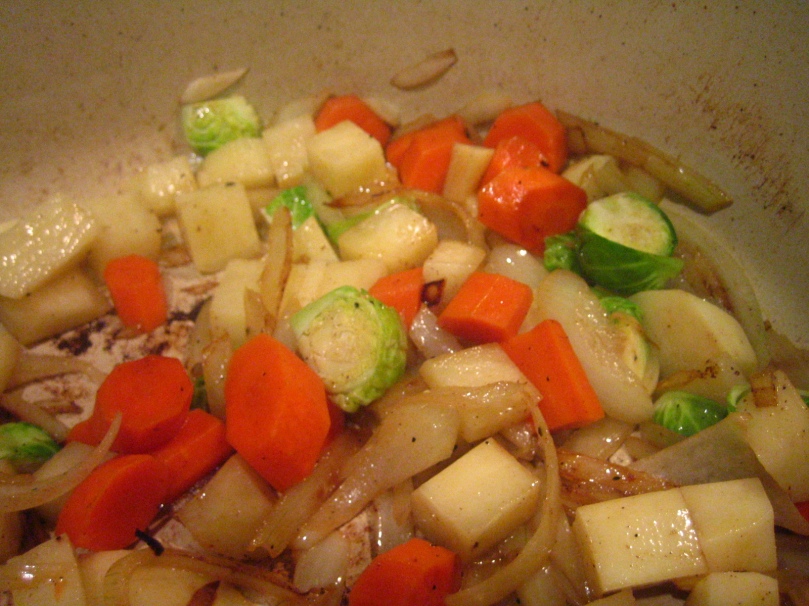 Once the vegetables have softened, it’s time to deglaze.  This is my favorite part.  It’s when all the flavor comes to the party.  Basically, just add your liquid and scrape the brown bits off the bottom of the dutch oven. 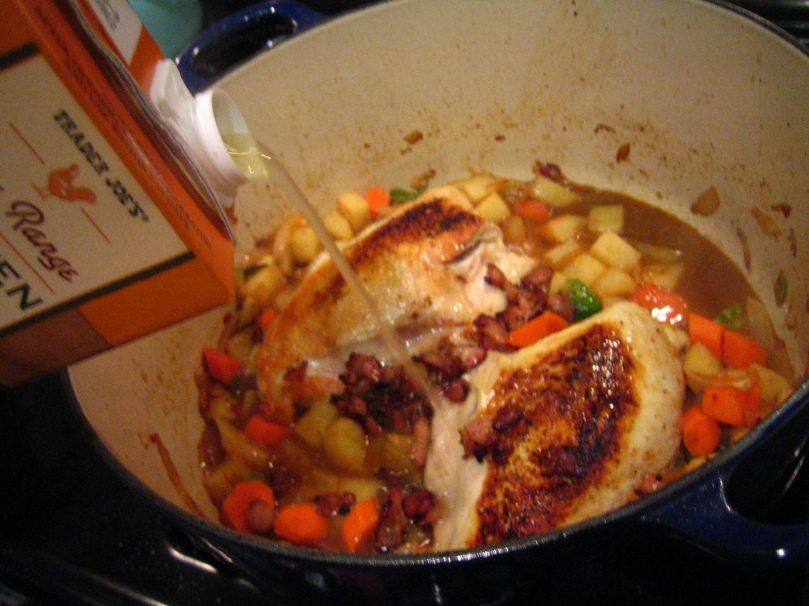 That’s basically it.  Then you just simmer away until the meat is so tender it starts to fall off the bone.

The trick is to use a heavy bottomed pot with a lid (hence the dutch oven) and cook over low heat.  You need to devote a little time to braising, but it’s totally worth it. 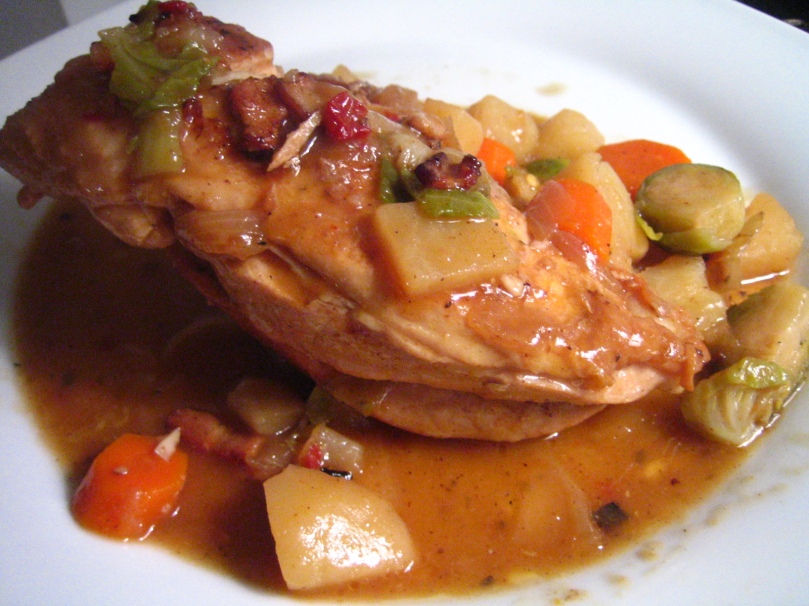 2 slices bacon (I used apple wood smoked, but any flavor is fine)

1 T chili sauce, or to taste

spices:  I used a sprinkle each of salt, pepper, cajun seasoning and cayenne pepper

Sear chicken over medium-high heat until golden brown on each side, set aside.

Cut bacon strips into lardons (ie, into cubes) and add to dutch oven.  Once the fat has rendered, set aside.  Remove all but a little of the fat from dutch oven and add onions, carrots, potatoes, garlic and spices.  Saute until tender (about 6-7 minutes) and then add chili paste.  Once combined, add beer.  Let reduce for a few minutes and then nestle chicken and bacon back into pot, and add chicken broth.

Once the mix has come to a bubble, reduce heat to medium-low and cover, simmering for about 45 minutes or until the meat is falling off the bone.  During the last 10 minutes or so, remove the lid and let the sauce reduce.  If necessary, add a teaspoon of corn starch to a bit of water and stir into mix to thicken. 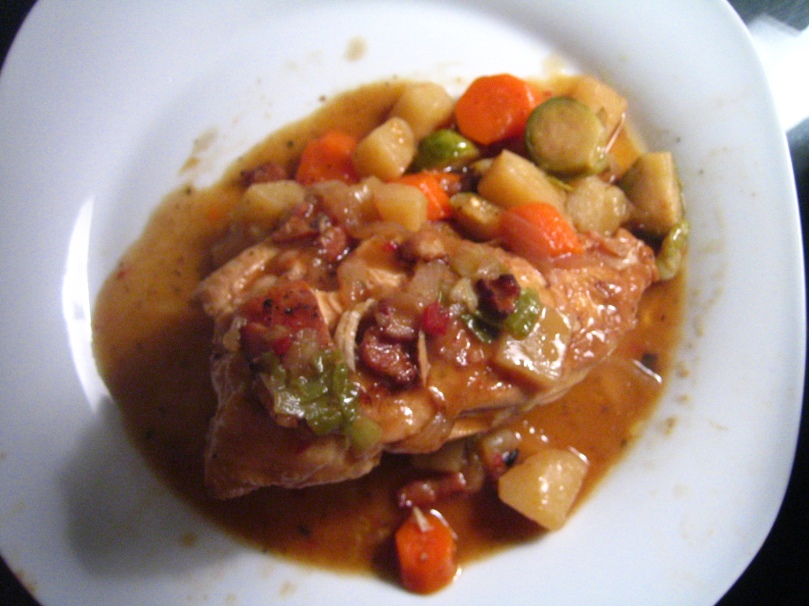 What’s your favorite cooking method?  Have you taken a stab at braising?