Since I’m already well into my second trimester now, I figured I should document the first 13 or so weeks before the pregnancy brain completely erases it from my mind.

I’ll preface this by saying that I think I’ve had a relatively easy go of things during this pregnancy, for which I feel very fortunate, but there were several weeks in the first trimester that felt very exhausting.

As I mentioned in my last post, we found out that I’m pregnant on May 3 which put me at 4 weeks pregnant. I felt great at that point, and did for another two weeks or so. To the point of thinking, “this is totes kewl, I got this!”.

LOL, you guys. Once the hormones really started kicking in around week 6, it was not totes kewl. My main symptoms were nausea in the morning and crazy fatigue. Like, put my head down on my desk at 2pm because I can’t fathom staying awake any longer.

My doctor didn’t see me for my first prenatal visit until I was 9 weeks, so for a while I was relying on Dr. Google and pregnancy apps for insights. I’m sure every first-time pregnant lady finds herself in this situation, but I have to say I was surprised that I wouldn’t see the doc for such a long time! Huh, now I know.

Here’s a rundown of the rest of the first trimester:

The belly: Given that I am a short, short lady I have always anticipated that I will have a giant pregnant belly. Maybe some weird part of me is looking forward to looking like Violet Beauregard post-forbidden gum eating, but I asked Donnie to start taking pictures of me from the very beginning in hopes that I’d spy a baby bump.

Turns out, a baby the size of an apple seed does not in fact cause you to look noticeably pregnant. HUH.

For reference, here’s a photo at the start of week 11: 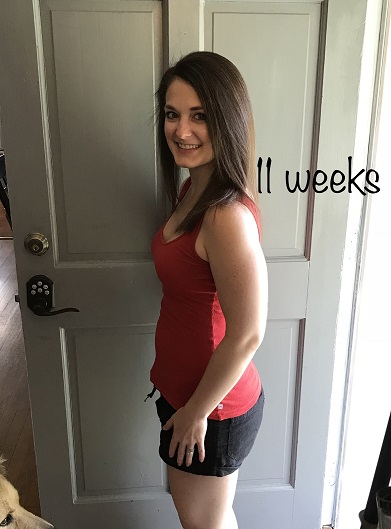 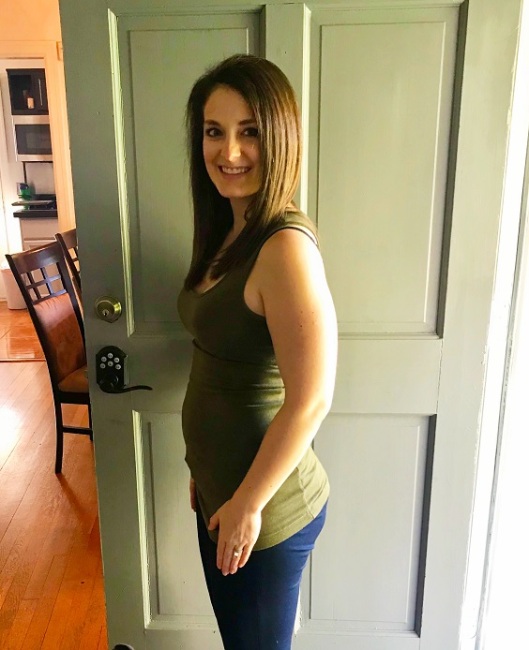 It’s not dramatic, but I can see a difference between these. I’m not crazy, right?

Morning sickness: I wouldn’t say I got away scot-free on this one, but as I mentioned I didn’t have a horrible time of it. I would feel the nausea descend on me after breakfast and it generally subsided by lunch. Considering so many women say “morning” sickness is a misnomer and should be called “all-day” sickness, I’ll count my lucky stars on this one.

And luckily, no food aversions! I love eating, that would have been so sad.

Other symptoms: Fatigue, as I mentioned, and also headaches. Ohhh, the headaches. Headaches that were like,

For the record, this symptom is still going strong in the 2nd trimester, but around week 8 that I had a wicked headache for a solid four days. It was brutal.

Cravings: Even though my morning sickness was pretty mild, I did develop a few strong food cravings very early on. The first was bagels. There’s something about bagels, right? To be fair, I have always loved bagels and it’s possible I’m using pregnancy as an excuse, but…I’m not about to stop. Probably not until this kid is in college. The second craving is fruit. I’m not usually a huge fruit eater, but I’m definitely eating more than usual now. Favorites include apples, mango, and nectarines.

Apps: In part because of the long wait between the positive pregnancy test and first prenatal appointment, I have downloaded so many pregnancy apps. It’s out of control. It’s a good thing I pay for extra memory on my phone, otherwise I’d have to start deleting other (probably more critical) apps. At the moment, the Glow Nurture and Bump apps are my favorite.

I will say, however, that if you are prone to anxiety beware of the community forums on some of these apps. It’s worse than WebMD-ing your symptoms.

And now…today marks 19 weeks! We have our midway ultrasound this Friday, which I’m looking forward to. I’ll check in again soon with a belly update!

One thought on “First Trimester Recap”