For as much as I love to cook, I have never been great at meal planning. Or meal prepping.

Occasionally, I’ll spend 10 minutes chopping a bunch of vegetables to snack on throughout the week, but that’s pretty much the extent of it. And if I’m being honest, it really doesn’t happen all that often.

Given this new season of life that my little family is about to enter into, I figure it’s time to change my fly-by-the-seat of my pants ways and start holding myself accountable to the groceries sitting in my fridge and not let them go to waste. Food waste, man – it’s the worst, isn’t it?

I also realize that my days of having all the time in the world to prep and cook dinner are limited. Lately I’ve been experimenting with quick-cooking dinners that involve prepping fewer ingredients and dirtying fewer dishes. I’ve been at it for a few weeks, and I honestly don’t think the variety of our meals nor satiety they provide have suffered.

That being said, here’s last week’s dinners. Most of these dinners are fairly healthy (at least from the nutrient standpoint, if not totally low-cal. I AM pregnant after all), and can be prepped, cooked and on your plate in 30 minutes or less. I hope these give you some ideas for your own week!

No real recipe needed – I seasoned some drumsticks and we threw them on the grill, basting every few minutes with bbq sauce. Served with Tahini, Pepita & Apricot Slaw kit from Trader Joe’s.

Beef and broccoli with (cauliflower) rice

I thinly sliced a semi-thawed ButcherBox sirloin steak against the grain, then let it defrost the rest of the way in the fridge (<– this is a great way to get super thin slices of meat that stay tender when cooked). I then sauteed it loosely using Just a Taste’s Easy Beef and Broccoli recipe. Served over a mix of regular white rice and cauliflower rice.

I topped some wild salmon filets with salt, pepper, chili powder, and garlic powder and baked at 375 until flaky. I quartered some Trader Joe’s teeny tiny potatoes, tossed them with a little olive oil and TJ’s Everything but the Bagel seasoning and roasted for ~30 min at 425. Last, I sauteed some half moons of zucchini in the same spices as the salmon until tender.

And I totally flaked on taking a picture of it, so here’s an artistic rendering of my plate:

We threw some pesto chicken (packaged, again from Trader Joe’s) on the grill, and I sauteed up a package of TJ’s frozen cauliflower gnocchi with some zucchini, garlic and a sprinkle of parmesan.

We went to the movies on Saturday afternoon and came home full of popcorn, but knew we needed something with a little protein. I cooked up a frozen TJ’s entree (Kung Pao Chicken), added broccoli and served it over rice. We ate a lot of sodium this day, but what can ya do. 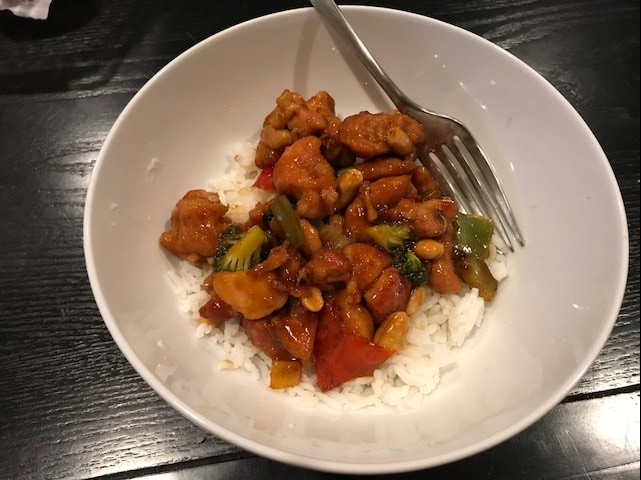 Both Donnie and I bought biscuit dough over the course of the last week (this is what happens when you spend enough time with your spouse…you pass food cravings by telepathy), so I sauteed up some ground turkey with peppers, onions, and taco spices and then stuffed that inside split biscuits with a little cheese, empanada/turnover style. Baked those until golden, and served with some sauteed broccoli on the side. 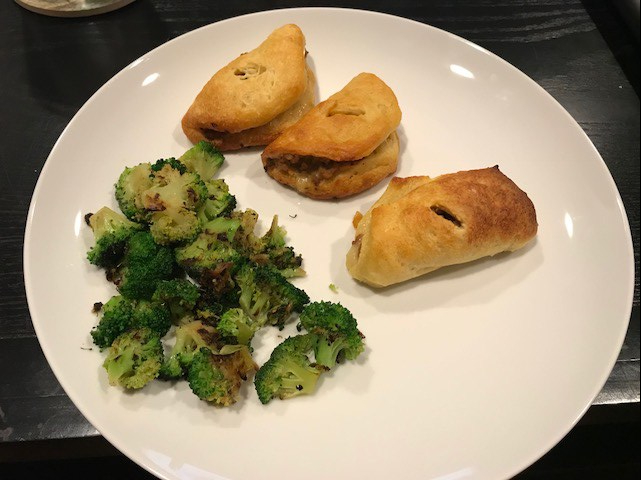 And that’s a full week of dinners! Usually we order in or go out at least one night per week, so don’t think we cook 7 nights every week. Although, sometimes cooking is faster than takeout (Saturday’s dinner, for example), for what that’s worth.

What’s on your plate this week?